A first-year college student arrives in Paris for a year of study, eager to use her high school French to impress her host family. At her new home, she asks to be directed to the “salle de bains” (bathroom)–three cups of strong French coffee have caught up with her. Her host mother gives her a strange look and leads her to a small room, containing only a bathtub. In the quaint European way, the toilet is in another room. That happened to my mother, who tells the story to illustrate the cockiness of her younger self. But her story illustrates another point, as well: one person’s understanding of a term may vary surprisingly from another’s, and even commonplace words can be misunderstood.

Speaking the “same language” is important, and it can be a challenge even among fellow English-speakers, when there are no translation issues to get in the way. It’s all too easy to assume that because we’re familiar with a word, we understand what the speaker means by it. Take the term “legacy”. A technical writer might use the word to refer to documents that predate her current project–documents that must be migrated to a new format. The software developer she’s talking to, however, may understand it to mean documents that relate to a legacy computer application that is still used but no longer maintained. The two can talk at cross-purposes, becoming increasingly confused (and irate) unless the term is clarified—and it’s such a common word that it may take some time to identify where the miscommunication lies. Building a common language—a glossary—of clearly defined terms helps forestall misunderstandings, and in the opening stages of a content management project, it can be essential to prevent the project from becoming mired in confusion. Until the members of your team use terminology consistently, you’ll waste time chasing down misunderstandings and soothing egos, as words are interpreted differently by the interested parties. Developing and using a shared glossary takes persistence and discipline, but here are a few tips that can make the job easier and can facilitate communications among members of a team.

Start developing your glossary the first time you sit down to talk about your content management project. When someone uses a term specific either to the project or to the industry, discuss the meaning of the word. When you arrive at a definition that’s agreeable and understandable to the team, write it down. Capture abbreviations and acronyms, too. Provide examples if there’s a chance that the meaning is unclear. Your goal is to capture not only technical terms, but also any word that may have more than one interpretation for your project. This glossary will be the definitive repository for your project terminology, and team members can refer to it any time they need a definition for a deliverable, or are confused about the meaning of a term.

Record the terms and definitions in a document that is available for viewing (but not editing) by every member of the team. Update the list at every meeting, and encourage team members to refer to the glossary and suggest additions. Until it’s a few months old, your glossary will be sparse and unstable. However, if you consistently refer to it, and if your team learns that they can find and rely on it to make their jobs easier, you’ll get increased buy-in. Define a process for individuals to suggest edits and additions, and always follow your process. Since the glossary is a living document, it’s never completely done; refine and improve it and make sure that there is a mechanism for maintaining it after the project ends if end-users will still need it.

Bear in mind that people are territorial. Glossaries can become a political game. Folks will feel ownership of some terms, and this is another opportunity to defuse potential conflicts before they escalate. You may have to play mediator to achieve consensus, but the alternative is having meanings run amok. Take the time to explore divergent meanings, and to document and share them.

Take the time to ensure that you and your team are speaking the same language, and use discussions of the glossary to open channels of communication. You’ll reduce the chances of misunderstandings, and you’ll save time and money as well.

Lisa Woods is a consultant to the pharmaceutical and insurance industries who specializes in computer system validation regulatory compliance, and making unwieldy documentation manageable, useful, and compliant. Contact her at ldealanwoods@hotmail.com 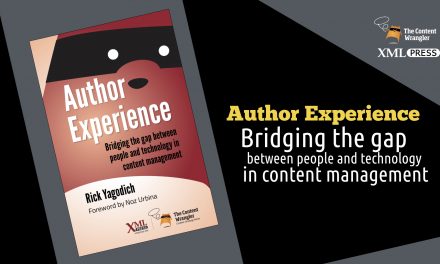 The Current State of Author Experience